"Hallelujah I Love Her So" Transcription

I had to learn "Halleluja I Love Her So" by Ray Charles for a gig I had awhile back. Normally when I learn a tune and it comes to the solo, I like to improvise my own. But I always check out the original to see if there's anything I like, or even better, something I should steal.

When I got to the solo section of this tune, I was so knocked out by Don Wilkerson's tenor sax solo I knew I had to learn it and play it on the gig—something I almost never do.

It turns out I'm not the only one who thinks it's great: even the Wikipedia entry on this song mentions the sax solo (how often does that happen?) describing it as "memorable."

Wilkerson was a new player to me, but there's nothing I like more than finding out the names of guys on classic records and seeing how their lives intertwined with people I already knew about and what else they were up to. It turns out Wilkerson's career included working with guitar great Grant Green and Cannonball Adderley—two of my favorites—in addition to being a sideman of Ray Charles.

So why is this solo so memorable? I hate to keep going back to the same well but it turns out that well has a lot of water in it—this solo makes brilliant use of chord tones (for a video and post about chord tone soloing, click that link) as well as Blues language and chromatic approach notes. It's a master class in how to navigate these kind of advanced, Blues-based tunes.

Have a listen to the song and solo (Wilkerson's solo starts about 1:22) and come back for the transcription. 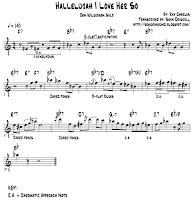 The solo transcription with accompanying analysis is to the right so you can follow along and a link
to a PDF you can download is at the bottom of the post for guitarists (with TAB) as well as a Bb and Eb version for horn players.

The Quick and Dirty Theory Breakdown

What's Don Wilkerson got going on in this solo? The answer is some pretty hip use of chromatic lines to fill out what is basically a straight up chord tone solo. Let's have a look.

In the first 4 measures, Wilkerson emphasizes the harmony by playing on the chords. Each time he does this nicely by using a repeated Bb Blues figure (over the Bb7 chord) that in each case anticipates the arrival of the Eb7 chord. What do I mean by "anticipation?" It means, he plays notes from the Eb7 chord (in this case Db and G) a full two beats before the Eb7 chord comes in bars 2 and 4 -- anticipating the chord before it arrives:

The next 4 bars have some great Bb Blues material over the Bb7 chord—not a surprise there. But notice what happens in bar 8 when the chord changes to Eb7. He plays an Eb right on the downbeat, walks up chromatically to G (the 3rd of Eb7), then starts a chromatic walkup to E natural which is the root of the next chord (Edim7) on the downbeat of bar 9—two, cool chromatic approach lines in a row landing on a chord tone that's coming up. This shows his thought process, anticipating the next chord, in this case a beat early by starting a chromatic walkup to it.

It's this kind of playing that really sets up tension (chromatic movement) and release (hitting chord tones) beautifully and makes for a great solo.

The final 5 bars of the solo (starting at bar 9) has him doing a nearly total chord-tone solo with the exception of a couple chromatic approach-notes.

Mimicking this kind playing, especially the chromatic lines can really add some flavor to your playing and this is a great solo to learn and steal material from.

To me the most valuable material here is the chromatic approach lines which really add a lot of flavor to this solo. If you've already learned how to play a chord tone solo (and you definitely should), this is the next step in filling out your playing and giving it life.

A Final Note About Learning Other Instruments' Solos

I've made it a habit for at least the last ten years to get away from learning guitar material (with the exception of Wes Montgomery) and when I do transcribe something, to make sure it's another instrument. The reason is, I already know how to play guitar. I'm more interested in developing my own style further, not copping the style of another guitar player.

Want to learn how to comp and come up with new chord voicings? Try learning a Bill Evans piano solo. Want to challenge your technique and command of BeBop language? Learn a Charlie Parker solo. Want to learn about space and pocket playing? Learn a Bootsy Collins bass line.

Learning another instrument's solo forces you out of focusing on guitar playing and onto playing music. And if it's difficult enough, like the Charlie Parker solos I've been working on, they're like etudes. In order to play the more difficult horn lines, you have to figure out technical solutions that you'd never encounter playing guitar. It makes you a better player, but more importantly a better musician.