The Guitar Solo That Taught Me How to Play Fast 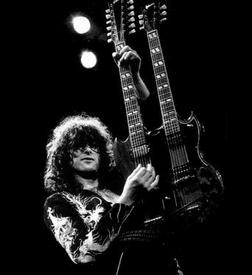 I think my favorite Led Zeppelin record is Houses of the Holy, and part of the reason is the right-out-of-the-gate attack of track 1, "The Song Remains the Same."

Between Jimmy Page's electric 12-string chords, the thunderous sound of John Bonham's drums, and the incredibly melodic bass playing of John Paul Jones, you knew this was a band at their peak. I was hooked the first time I heard it.

Probably more importantly, as a guitar player, when I heard Page's ripping, 8-bar solo before the vocals even came in I knew I had chosen the right instrument for me.

When I first started playing guitar I didn't have the chops to play this short solo so I would try and fake it, just getting as close to it as I could. I finally just gave up until a few years later when I finally had some technique together.

When I did get it together, I realized how formative this piece of playing was. This is the solo that taught me many things, the first of which was how to play in a fast, loping style using pull-offs and hammer-ons similar in style to Bluegrass playing.

If you're a guitar player and think of yourself as technically challenged, this solo can help you understand that with minimal effort, you can use techniques you probably already have together to play impressively long, fast lines without having to spend hours getting your right-hand chops together. Not that there's anything wrong with getting your right-hand chops together.

The second, and probably more important thing I learned from this solo was though Jimmy uses what I thought of at the time as the Blues Scale (it wasn't—just a Minor Pentatonic with one case of an added note), the sound had a Major sound—D Major to be exact.

This was a revelation to me. The idea that you could use a scale in more than the way its name implied.


To the right is the transcription and TAB for the solo, a PDF is available at the end of this post. Continuing below is an analysis and lesson on the use of the Minor Pentatonic scale and how it's the same thing as the Major Pentatonic scale, and all that implies.

If you just want the tl:dr version of this analysis and lesson, scroll to the bottom of this post. But if you want to learn how and why this all works, read on.

Minor = Major
"The Song Remains the Same" has solo chord changes that are relatively simple—just a back-and-forth between a D Major and Dsus4 chords with the final 10 bars in basically D Minor.

Any of you with a passing knowledge of Pentatonics and keys can see that in the first 8 bars of the solo, Jimmy is using what you probably think of as a B Minor Pentatonic scale.

But why is he using B Minor Pentatonic over D Major chords? Because they're the same thing.

Let that sink in a second. B Minor = D Major. If this is new to you, you're probably thinking, "How can that be? Aren't Major sounds and Minor sounds opposites?" Not at all.

With the knowledge that you can transpose keys (change them) and you'll still retain the same relationship between the notes, let's move the above example up a half-step (on the guitar that would be up one fret).

Why The Hell Am I Telling You This?
Because I'm about to make your improvising life a lot easier.

See that? D Major Pentatonic has the exact same notes, just starting on a different degree of the scale.

This not only can shake up your improvising, but if you're a songwriter or an aspiring arranger, your chord choices too.

Bottom Line It For Me

But what does that mean to you right now? If you're one of the multitude of musicians who use the Minor Pentatonic scale over everything, including over Major chords (for instance, applying D Minor Pentatonic over a D Major chord), this fact just doubled the amount of mileage you can get out of the scale you already know.

Here's the simplest way to apply it: over a Major or Dominant 7 chord, improvise using the Minor Pentatonic scale with its root (first note) a Minor 3rd, or 3 half-steps down (on a guitar that's 3 frets down) from the chord you're playing over.

Go to your instrument right now and try it. Look at where the note A is on your instrument and just go down 3 half-steps, you'll land on F#. If you can, have an A Major chord ringing and then play the F# Minor Pentatonic scale over it. Go ahead, I want you to hear that. I'll wait.

What's Going On here?
In music theory world, what you're doing is playing one of the chord scales (F# Minor Pentatonic) for the Relative Minor of its Relative Major (A Major). That's a mouthful, I know. But look, here's why it works:

That F# Minor Pentatonic scale has 3 out of the 5 notes contained in the chord you're playing over (A Major), and two additional, cool "chord tensions" F# (the 13th) and B (the 9th). (A note that is not contained in the chord you're playing over is referred to in theory as a "tension" because it creates tension in the music and wants to resolve to one of the chord-tones (for a post and video about chord-tone soloing, click here)).

That's why that Minor Pentatonic works so well over the Major chord and this is precisely what Jimmy Page was exploiting in the transcription above.

You Said There Were Implications for Chords Too
That was the potatoes, here comes the gravy—on to the bonus material.

Without getting into chord substitution too deeply, remember when I said B Minor is the same thing as D Major? Well it works with chords too.

Now I know to your ear, you perceive a D Major chord and a B Minor Chord as being vastly different and I would agree with you, but there's something in music called Chord Substitution and there's a worked out system for it. Here's a quick example.

You can, without fear of prosecution from music fans or critics, substitute the Relative Minor chord for its Relative Major chord. For example, say you wrote a chord progression for a verse that goes:

The next time the verse comes around you want something a little different, a change of mood. You can substitute B Minor for that D Major beautifully:

If this is new to you, try playing it right now.

Will it sound different? Of course it will but it will also work and might be a nice change of pace from your original chord progression.

So remember, the chord substitution concept works exactly the same way as the our scale application.

Wrap It Up
Get this into your playing, now. It's amazing the worlds that will open up for you when you understand this simple concept. Some of you are probably wondering if Jimmy knew about the theory behind what he was doing in his solo.

Who cares? I don't. He applied this principle, conscious or not in his killer solo because it sounded good. You can do the same thing.

Have fun with this. More Pentatonic usage to come.

TL:DR
If the above was too much for you to read or process and you just want the tl:dr version, here it is:


For a PDF of the above transcribed solo,
CLICK HERE

*Here is a breakdown of every key with its Relative Major and Minor in a chart. Don't be intimidated by the circle graphic at the top right of the page, just look at the table below. It's simple and gives all the information you need.

There's a Reason Why Your Time is Bad: Blame Your Brain

I was listening to the excellent podcast Radio Lab the other day and heard something fascinating.

The entire, short podcast was about peoples' perception of time, especially how it relates to Beethoven's 5th Sympohony, you know the one, the one that starts, BUH-BUH-BUH-BUUUUUUUHM...

We apparently have a bias in timing built into our circuits that affects how we perceive time. This is why we need to practice this and don't just have it together immediately.

In my two blog posts (1st one, 2nd one) and videos about playing with a metronome, I spoke in a general way about how important it is to get your time and feel together, but I didn't really question why people have bad time to start with.

Well, apparently a smart German physician named Karl von Vierordt figured this out in 1868 and even has a law (Vierordt's Law) named after him explaining the phenomenon.

Now you can blame your brain for your lousy time.

Give a listen to the podcast, it's relatively short and if you're a musician or even a fan of music it's a great listen.
Posted by LiquidWeight 2 comments: Links to this post

A couple weeks ago I hit more than 100,000 unique page views to this site. Again, this thing has become wildly more popular than I've ever imagined. I really didn't think there were that many people interested in improvisation but I guess I underestimated that drive that so many of us have to create something new.

Thank you everyone for visiting, emailing, commenting, reading and watching.

See you at 200,000.
Posted by LiquidWeight No comments: Links to this post