Doc Watson: RIP and Thanks for the Music

American flatpicking and bluegrass legend Doc Watson died two weeks ago on May 29 at the age of 89.

In honor of his memory, NPR's Fresh Air re-aired a great interview and in-studio concert they did with him in the late 80's along with his right hand man and fellow great guitarist Jack Lawrence. You should check it out if you like music at all and I'm guessing you do if you read this blog. The full interview and performance is available here.

While listening to the interview I was blown away by their performance of "Make Me Down a Pallet on Your Floor." This is a traditional American folk and bluegrass song which was new to me but doing some research I found it's been covered probably hundreds of times by great artists for nearly a century. It's a funny, up tempo tune as they perform it, but Doc Watson and Jack Lawrence's easy going rendition mask how virtuosic their guitar playing is. Both of them are monster players. Doc's contributions to music will be missed.

Below is a transcription of Jack Lawrence's burning solo on "Make Me Down..." as he and Doc performed it in the NPR interview. Transcribing it I was struck by how much bluegrass and jazz have in common. They both have the same roots so it's not surprising but digging into his lines it occurred to me that if you just tweaked a few things you'd have a great jazz solo. There's the same emphasis on chord-tone soloing you'll find in early jazz with some really nice chromatic approaches particular to bluegrass.

Here is the transcription and below it is a quick analysis of what he's doing. A link to a PDF of the solo is at the bottom of the page. 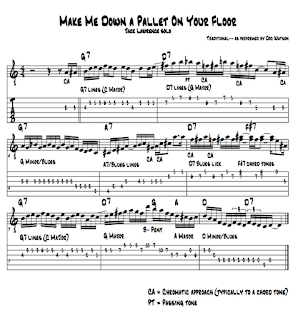 You can download a PDF of the transcription here.