John Scofield Explains How to Practice a Tune 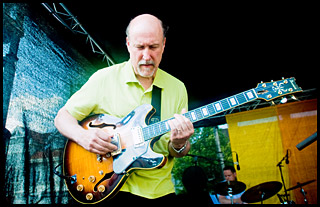 I recently posted a quick hit on a clinic that John Scofield did in the mid-90's that covered mostly how he practices and learns a tune as well as some general philosophy on improvisation and theory. It's a great clinic and I highly recommend you check it out.

As promised, here is a breakdown of the clinic and the methods he employs in order to get a tune under his fingers.


Scales First
Scofield's basic approach to learning a song—besides playing it all the time—is getting comfortable with the chord changes, first by playing the appropriate scales in time over the changes, connecting them at the chord change. He doesn't stop and try to phrase or play musically, he just keeps moving, changing position and scale as the new chord hits.

Here's an example of him doing it over Stella by Starlight which is the tune he uses throughout the clinic.

You'll see if you look carefully, he doesn't do this perfectly. There are a couple passing tones here and there and some ambiguous sections where it appears to me he's killing time in order to hit the next chord change. As I've said before, this is encouraging. This is hard to do and certainly hard to do perfectly.

It's also the same general idea that Kurt Rosenwinkel explains in a seminar I wrote about a while ago. The idea of being able to move scales through chord changes fluidly.

Some of Scofield's choices are interesting. For instance, in bar 10 he plays Bb Melodic Minor through both chords, even though E-7b5 is not diatonic to the scale. However it works great over the A7alt so I wonder if he's just not bothering with being correct in order to introduce more chromaticism or if he made a mistake.

Similarly he plays F Major all the way through bars 13-14, with the scale not being appropriate for the A7alt, even though the notes are all technically fine.

What's interesting is in this exercise he really only employs two scales, the Major and the Melodic Minor throughout the entire tune with one use of the Diminished at bar 28.

Scofield explains really well what the point of learning scales is:


The way you learn this stuff is learning scales, learning patterns and experimenting with them. You know I don't know anybody that's really gotten good at playing tunes or any of this stuff from just taking the scales [and playing them over a tune]. This stuff all comes after listening and learning about Jazz music from listening to records and listening to other people play it's just you know, music...What these scales do, to me, is they lead you into almost, chromaticism—that's what the Diminished scale does. You know, chromatic type of freedom, nobody really just plays the scales.

Arpeggios Second
Next he works on playing arpeggios over the changes which as I've noted before is essentially chord tone soloing.

His first go at it however hits a few bumps. It's not strictly an arpeggio or chord tone solo as he adds in some scale lines. He also hits some rhythmic snags because of the way he phrases some of his lines. I attempted to transcribe it as faithfully as I could while keeping the fairly obvious spirit of what he was shooting for. All the notes are there but you might have a slightly different interpretation of how the lines lay if you transcribe it yourself.

Scofield says: "Um, I think I stopped playing arpeggios at one point. [he did] But basically ... that was tertial, in other words going up and down in 3rds, which is not that far from 2nds [meaning scales], you know? I mean if I'm moving in scalewise motion it's just moving half or whole. But, the arpeggios are made up of 3rds, right? Chord tones in 3rds and my improvisation there was, I think all 3rds but you don't always start on the root and you can go up and down at will, so..."

He then goes on to play another example of a solo based on arpeggios, though again he still includes some non chord tones. He also does some really nice anticipations of some of the harmonies coming from the bebop style of targeting chord tones, for instance at the end of bar 4 and bar 28. After this solo he answers a number of questions and speaks a bit about transcribing.

Scofield says when he was learning he rarely would transcribe whole solos but instead would learn phrases—licks basically.

Again, I highly recommend you give this clinic a listen. There is some excellent information in it and some nice playing from Scofield beyond these three transciptions.

I'll close with his thoughts on Giant Steps which he talks about at the beginning of the clinic.


I don't play Giant Steps. I'm serious about this tune Giant Steps, this tune is too hard you know? [Audience laughter] Listen, check it out, Giant Steps is a great tune and I love Coltrane, I really do but the tune is not really a great tune for blowing on. Stella By Starlight is a great tune. You can get into a thing, or I can, maybe I'm just not good enough to play Giant Steps -- to me Giant Steps is symmetrical and an exercise. Stella by Starlight is a beautiful harmonic sequence that gives me ideas. Giant Steps just makes me confused, I have to remember that, you know [demonstrates playing over Giant Steps changes] -- now I'm thinking all the time, I can't even take any space. But anyway, don't worry about Giant Steps, unless you can already play Stella by Starlight. I'm serious! This tune, I've heard too much about this.