I might have bitten off more than I could chew on day one. I knew NAMM was big, but I really didn't appreciate how big until I had been there for well over two hours and realized I hadn't seen even an eighth of it.

But I soldiered on.

In the afternoon I hooked up with my buddy, LA guitarist and writer Dave Wood who was doing a demo with MOTU on Digital Performer. Dave's a killer player and a great guy who also introduced me to one of my favorite discoveries at NAMM: the Deuce Coup distortion pedal. 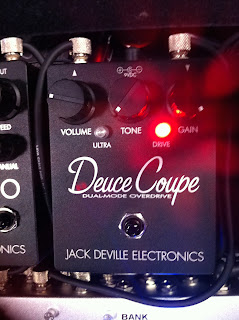 Jack and Cameron from Jack Deville Electronics spent a lot of time with me and demoed the pedal as well as a few of their other creations. I was blown away.

Incredibly warm sound, transparent and extremely responsive to attack and the volume setting on your guitar. Rolling off the volume on the guitar really cleaned up the sound while rolling it up brought such a big breakup coming out of a little Fender Princeton you'd think it was a cranked, much bigger amp. Just a killer.

I'm going to be picking one of these up when I get back to NY. If you get a chance to play through one of these, do it. I'm guessing you won't be disappointed.

The rest of the day was spent trying in vain to see everything (I really didn't understand just how big the convention center was), not go deaf and make it out of there without wanting to buy every cool thing I saw.

That evening I drove up to LA to hear some music at the Blue Whale jazz club with my friend and drummer Adam Fischel. Bassist Tim Lefebvre recently relocated to LA from NY and has a residence at the club through this week. The show had two outstanding drummers, Gary Novak and Mark Guiliana with Henry Hey on keyboards and electronics filling out the bill. It was great to hear Tim doing his thing out on the West coast.

More from NAMM coming up...
Posted by LiquidWeight