Thelonious Monk Tells You How to Play Jazz -- You Dig?

A friend of mine sent this to me a few months ago. I know it's made the rounds on the web but it was new to me. 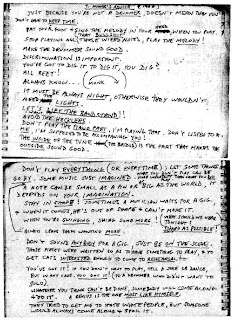 Click on the image above to see full-size or just read below for the text.
Some handwritten notes from a notebook with some of Monk's philosophy, both for music and life apparently taken down by Steve Lacy.

I heard an interview with Steve Lacy a couple years ago where he spoke about playing with Monk. Many of the things he said in the interview stood out for me and I even wrote some down because they were so insightful so it was cool to see some of those very things appear in Lacy's notes from 1960.

I love seeing stuff like this from musicians and artists I admire because it's a peek into their thought process that you don't often get just from watching them perform. It let's you know what's going on behind the scenes.

Some of this is beyond me ("ALL REET!" -- an inside joke? A reference to Cab Calloway?) but much of it is good advice for any musician in any style.

I think it's great to see that Monk was aware and thinking of his audience. He's so often portrayed simultaneously as nutty, a tortured genius or in the throes of mental illness but this shows his very clear ideas about performance and how to sound good.

If what he says at the end is true – "A genius is the one most like himself." – Monk was most certainly a genius. 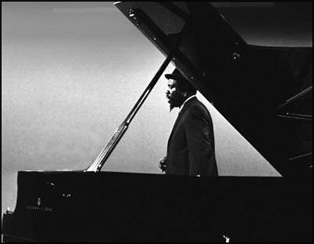 • Just because you’re not a drummer, doesn’t mean you don’t have to keep time.
• Pat your foot and sing the melody in your head, when you play.
• Stop playing all those weird notes (that bullshit), play the melody!
• Make the drummer sound good.
• Discrimination is important.
• You’ve got to dig it to dig it, you dig?
• ALL REET!
• Always know….(MONK)
• It must be always night, otherwise they wouldn’t need the lights.
• Let’s lift the band stand!!
• I want to avoid the hecklers.
• Don’t play the piano part, I’m playing that. Don’t listen to me. I’m supposed to be accompanying you!
• The inside of the tune (the bridge) is the part that makes the outside sound good.
• Don’t play everything (or every time); let some things go by. Some music just imagined. What you don’t play can be more important that what you do.
•  A note can be small as a pin or as big as the world, it depends on your imagination.
• Stay in shape! Sometimes a musician waits for a gig, and when it comes, he’s out of shape and can’t make it.
• When you’re swinging, swing some more.
• (What should we wear tonight? Sharp as possible!)
• Always leave them wanting more.
• Don’t sound anybody for a gig, just be on the scene. These pieces were written so as to have something to play and get cats interested enough to come to rehearsal.
• You’ve got it! If you don’t want to play, tell a joke or dance, but in any case, you got it! (To a drummer who didn’t want to solo)
• Whatever you think can’t be done, somebody will come along and do it. A genius is the one most like himself.
• They tried to get me to hate white people, but someone would always come along and spoil it.
Posted by LiquidWeight 1 comment: 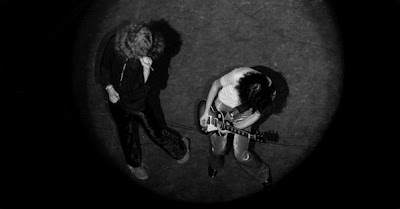 When I was a kid I made it my mission to learn every Led Zeppelin song there was. In fact, you could probably say Jimmy Page taught me how to play the guitar as I played nearly nothing else (except maybe for a little Deep Purple, Aerosmith and Yes (yes: Yes)) thrown in until I was about 15.

There was nothing more satisfying than being able to figure out and play one of Jimmy Page's riffs. Turns out it's still pretty damn satisfying.

I was recently teaching a new student the Pentatonic scale and after having played it for a bit we reached the "so what now?" point. Black Dog is what. 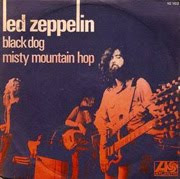 This song is like a dissertation on how to make music from that scale. Sure, it has a few approach notes but in essence it's pure Pentatonic.

Funnily enough, this one was written by John Paul Jones who said "I wanted to try an electric blues with a rolling bass part. But it couldn't be too simple. I wanted it to turn back on itself."

I think he succeeded on this count. This thing is slippery as hell between the shifting rhythms of the riff and what John Bonham is doing. It's easy to interpret the instrumental sections in varying ways but as I transcribed it I went with what seemed to make the most sense taking into account the drums, harmonic motion and the phrasing.

No matter, the point of this transcription is to get the notes under your fingers so you can play along with the record (mp3?) or with your cover band. It's a good way to start. 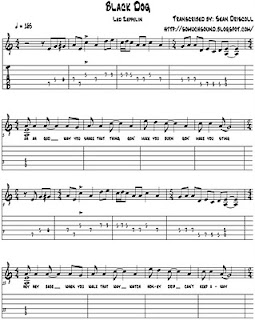 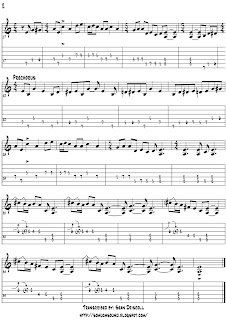 This transcription is through the first chorus. I've notated the vocal line as well for reference but did not include the first one.