Exercises for While You're Out There

A number of people wrote and commented on my outside playing video, asking specifically about my 4ths and 5ths example.

While most of the comments asked for written examples or exercises (a few provided below), some were asking what I was thinking about while playing those intervallic lines.

Intervallic playing, like any kind of outside playing is very different in approach than inside playing. It's a much more "big picture" way of improvising.

For me, it's about creating tension with my lines and chordal ideas but with the idea of resolving that tension at key points, often at the ends of natural phrases in the song, or if you're playing in a more open setting – say vamping on a static harmony – resolving the tension at the end of a 4, 8 or 16-bar phrase.

So, to rephrase, I'm not thinking about playing particular harmonic sounds or implying chord changes or anything, I'm really just playing intervallic shapes, in the case of the video 4ths and 5ths primarily, and moving them around on the neck chromatically. The whole time though, I'm listening for points to resolve my lines (in the video I did it every 4 bars), and that is when I take a harmonic approach and play 4ths and 5ths that are inside to the key that I'm playing over.

Now, on to the examples!

I would first encourage you to play a scale you're comfortable with in 4ths, 5ths and 7ths. Improvising using these types of leaps – and on string instruments a lot of string skipping – will be much easier if you first get used to hearing these intervals in a harmonic situation your comfortable with. 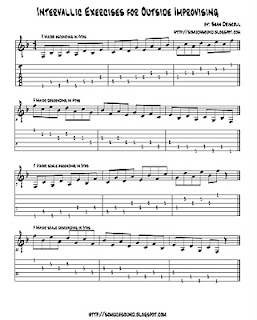 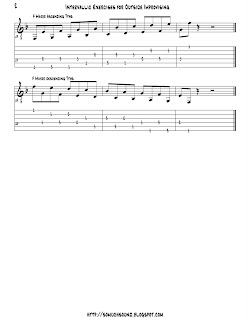 These first two pages have the Major scale played ascending and descending in 4ths, 5ths and 7ths. Get comfortable with this before moving on to the line exercises below. Also, play these scales harmonically as well, as double stops up the scale.

For line examples, I've provided a few exercises below to get your fingers and ears working together. This is a very different physical approach than scale or arpeggio playing (especially for string instruments). The first two examples employ some mostly 4ths/5ths based sequences, one descending and ascending. The third and fourth exercises employ mostly Minor 7ths/Major 2nds, again both ascending and one descending. 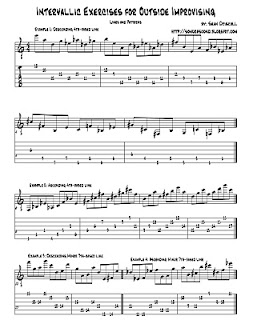 Finally and most importantly, these are examples, they're not licks to plug in at appropriate moments of wailing. They're a way to get your fingers moving in these kinds of shapes and get your ears used to hearing these types of relationships. This is the reason these lines, though they are sequences, are not strict all the way through. I'm purposely breaking up the pattern in a few of the examples as a stepping stone to get you out of the mindset of just playing straight patterns.

As Hal Crook once said to me about exercises in general, "They're not the shit. They're the shit leading to the shit."
Posted by LiquidWeight 4 comments: Links to this post