I've noticed a lot of confusion on different forums about modes. Players want to know how to use them, but are intimidated when approaching them. Modes have somehow taken on a mythic quality -- kind of like those exotically-named scales Gypsy Minor and Super Locrian-- scales that many musicians would prefer to view from afar.

Fear not. In this introduction to modes, you'll learn what they are, where they come from and seven of the most common ones.

First off, remember when learning anything new about music: there's only 12 notes* -- so how hard can it be?

Definitions
Simply, a mode is just a name for a scale derived from another scale. Got that? A mode doesn't exist on its own, it exists in relation to a parent scale. 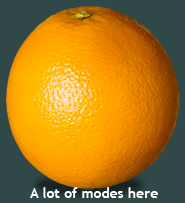 If this is confusing, here's an analogy using fruit: An orange is a scale. Orange slices are a mode. Orange juice, another mode. Orange zest still another. You recognize that the modes of the orange (slices, juice and zest) are different things from each other but that they all come from the same place, the parent scale: an orange.

Modes are that easy.

OK, now that you understand the concept, here it is in practice.

Major Scale Modes
The most commonly referred-to modes, like when people say, "Hey, do you know your modes?" are those derived from the Major scale. I'm sure you've heard or even had some experience with a few of them. Let me fill in the blanks for you using C major as the example.

There are 7 notes in the C major scale so there are 7 modes you can create from the scale. It turns out they all have Greek names, which makes them easier to remember if you're Greek, but seem somewhat exotic if you're not. 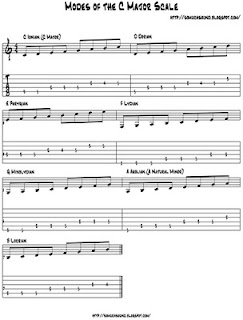 So, if you know the major scale, it turns out you already know all its modes. You just start the scale from a different note and you're playing a mode. And if you're improvising with these modes, landing on the first note of them on a strong beat or at the end of a phrase will reinforce that you're playing one of the modes and not the Major scale.

Perception
Maybe you're wondering, If I'm just playing the Major scale from a different starting note, why doesn't my ear hear it as C major? The reason is we're very susceptible and open to sound by reinforcement. Modal playing requires proper reinforcement of the starting note (in music theory it's called the "one" -- because it's the first note -- or the "tonic"), so that your ear makes the connection that it's a mode you're playing, not the Major scale.

Jump in and play with these! There's three Major-sounding modes (Ionian, Lydian and Mixolydian) and four Minor-sounding ones (Dorian, Phrygian, Aeolian and Locrian).

A great way to really hear how they work is to use a sequencing program to accompany yourself. Set up a drum loop or metronome and a bass drone pitch of the mode you want to work with. For example, if you want to play around with D Dorian, set up your drum loop, make the bass drone pitch D and then play the C major scale over it, making sure to start on D and emphasizing that pitch on strong beats and phrase beginnings and endings. Suddenly your C major scale sounds like a D minor one.

And if you've ever been afraid of music theory, guess what? I just taught you some. Music theory is simply a way to talk about and better organize sounds. Remember though, music came first, the theory second. Playing your instrument is the best way to experience and express your sound, theory is just a way to talk about it when you're not playing. 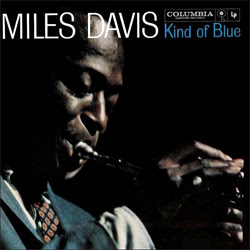 Extra Credit
Listen to Miles Davis' record Kind of Blue if you haven't checked it out before, and if you have, check it out again. It's full of modal tunes and playing and additionally is one of the greatest records of all time.

Next up: a video showing you some modal playing and improvising ideas.

* Only 12-notes in Western music. Middle Eastern, Balinese and lots of others have more. Be glad you're not learning things in those traditions.
Posted by LiquidWeight