Out Cat, Out: Steve Coleman Transcription

I got a lot of hits and emails on my post about Drew Zingg's solo on Steely Dan's "Peg," mostly from players wanting to know more about his approach to playing "out."

If you're working all the time on playing the right notes and avoiding the wrong ones, how do you suddenly turn around and play the wrong ones on purpose?

Playing out is a tough subject to cover because there's many ways of doing it, just like there are many ways of playing inside.

Purposeful out playing, in which you're superimposing dissonant harmonic ideas or systems over the main harmony -- think playing "Giant Steps" lines over a Blues tune -- is one way to do it. This also has the benefit of giving your lines an inherent logical structure. On the other end of the spectrum is pure free playing -- think Ornette Coleman's groundbreaking records of the '60s (though much of his improvisation can be analyzed in functional harmonic terms). Then of course there are those moments where you forget what key you're in and you're making clam salad on the bandstand. Good times.

For those of you who think that playing outside is just playing a bunch of random, dissonant notes, here's an idea: over a tune or ostinato in C, just play random notes from the key. Who's going to pay to listen to that? Nobody. Why is that? Because you have to have good phrasing. There has to be shape and purpose to the line. It's hard to play well inside and it's just as hard to play outside.

So how do you begin to learn this kind of improvising if you've never done it before?

Listen to someone who does it well first.

Steve Coleman is many things-- consummate musician, writer, intellectual, composer and an absolute monster when it comes to improvisation. If you've ever heard any of his work, you've probably had your mind blown. 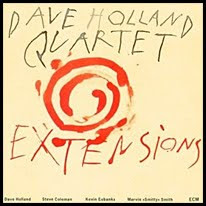 Steve has a brilliant solo on "The Oracle" (on Dave Holland's record Extensions) where he carefully and beautifully balances his inside lines with outside ones. This particular tune is a great starting point for understanding and learning outside playing because the harmony behind the solo is static which makes hearing the outside versus the inside lines very clear. If you're listening to complex changes and the soloist is playing out on top of them, it can be very difficult to hear the relationship between the two. Here on "The Oracle," Dave Holland plays an ostinato in Bb minor so you can clearly hear Steve's lines and their relationship to the home key.

The reason why I think this is a successful solo is Steve's use of tension and release. Notice how he'll play a phrase completely inside (bars 1-7) and then the following phase he adds tension by dropping in very dissonant notes and sitting on them purposefully (bars 10-13: note the held B natural in bar 11).

And I can't let this transcription go without calling attention to Steve's use of rhythm. If you're looking for ways to break out of your usual lines and licks, copy out some of the rhythms from this solo (bars 3-7 are a great example) and with a metronome, plug in your own notes. I promise you Steve's rhythmic concept here has enough material for you to work on for months.

Coming up, I'll have a video of myself playing over this ostinato, demonstrating inside and outside ideas.

Here's the video of the solo and the full transcription is below.

The Eb chart can be downloaded here in PDF format.

The Bb chart can be downloaded here in PDF format.

Click on the charts below to see full-size and download. Charts are in C and sound an octave lower than written. If enough people bug me, I'll put up a guitar chart with tab and a Bb version.

(Special thanks to my friend Alex Lacamoire who helped me decipher a particular rhythm in one bar of this solo that threatened to push me into a work release program.) 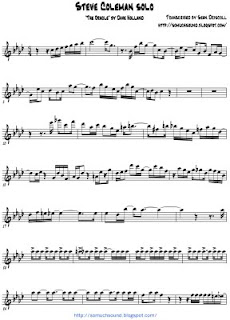 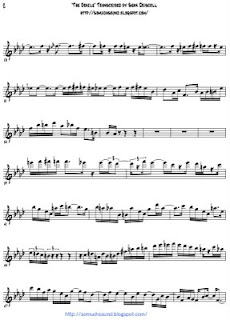 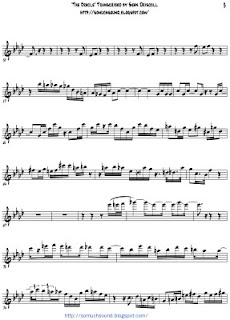 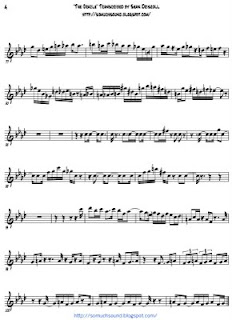