What's That on Your Face?

I've been busy working furiously on a Steve Coleman transcription and video for this blog, which by the way, is one of the more difficult transcriptions I've ever done. Since it's been a while, I thought I'd offer a little inspiration for today. I know I need it, this transcription is kicking my ass. 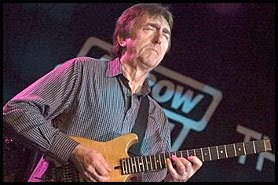 I was watching some clips of Allan Holdsworth tearing stuff up at some small club or another and there was a brief interview with him at the end where he was talking about the process of improvisation.

A small aside. I had the pleasure of meeting Allan once and got to talk with him at length about music and his learning process. We were interrupted constantly by fans at the club we were at, who kept telling him how "awesome" he is.

Pro tip: when talking to someone who is awesome, you don't need to tell them that -- they've heard it at least once or twice before. Why not try learning something from them? But I digress.

So in this video clip, Allan related a quotation about improvisation that I thought was inspirational as well as reassuring. Gary Husband, a frequent collaborator of his once told Allan, "If you start digging deep you can't expect to come up with no shit on your face once in a while."

The truth always has a directness to it, doesn't it?

I have a similar story. I attended a master class while in school with legendary saxophonist Dave Liebman. One of the other students raised his hand during the question period and asked how to learn how to stop making mistakes while performing. 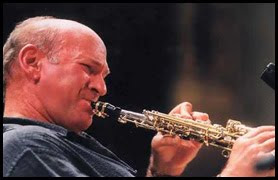 I thought Dave's answer was amazing. He said, "That's impossible. I make mistakes all the time, still. The difference between you and me is when you make a mistake, you throw up a red flag telling everyone you've made one and call attention to it. I make a mistake, and I just move on."

So, if you get shit on your face while fumbling around looking for something good, just wipe it off, and keep going.
Posted by LiquidWeight 1 comment:

It's How You Say It: Part Two of Pete Anderson Transcriptions

Back this week with Pete Anderson's second solo in the Dwight Yoakam song "Guitars, Cadillacs." For the transcription to the first solo, click here.

Pete's solo here is a more developed solo than his first in that he uses plenty of guitaristic techniques throughout and even steals a few from pedal steel. 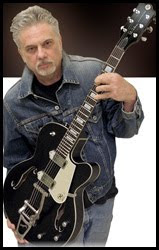 Again, the analysis (in blue, under the standard notation staff) falls flat in accurately describing what's going on here. The key to playing this solo well and the reason why it's so good is Pete's feel. Again, it matters what you say, but it really matters how you say it.

Pete swings like Tarzan, really stretching and pulling the time feel which adds a lot of rhythmic tension to his lines. You'll notice too, like in the first transcription, he knows how to construct a solo. He uses double stop 6ths as a recurring motif to tie everything together and he works them through the two different harmonies in the song. Notice too, the figure that starts the solo-- it's a call-back to the key thematic figure he used in his first solo.

As a guitar player, a highlight for me is bars 7 through the end where he makes use of a pedal steel sound (bar 8) with a nice bend on the G string from G# down to F# while holding the high E, and then use of different strings to play the same pitch (A) four times, one after the other (bars 9-10). That's the kind of thing you can only do on a stringed instrument and it really has an impact.

I discovered that the video I had linked to on YouTube has been taken down due to copyright restrictions so here it is on another site. The second solo begins at around 2:03 in this video. 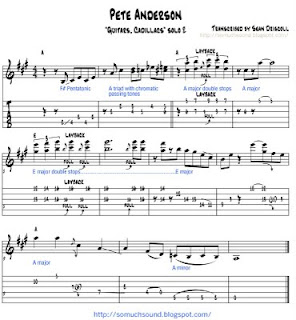