One thing we learned from my last post on this subject is Kurt Rosenwinkel has spent a bit of time getting his Pentatonic playing together. I'm guessing probably a little more than a bit.

If you're brave, check out the YouTube video about 1:40 into it.

A couple of things about this part of the video and his performance struck me. The range he plays in is quite low and he keeps to a pretty narrow zone on the neck. This again really demonstrates the wealth of harmonic possibilities available in a very limited area and shows you don't need to be jumping all over the place in order to grab the notes you want. Like McDonald's, there's probably one near you.

Notice the shape of this extended line too. He has a nice ability to make what would otherwise be a dry demonstration musical by not just moving in one direction and using the same patterns. The line grows and shrinks organically, peaking at the end when he hits the high C and comes back down. He's making music out of an exercise. Pretty cool.

And along those lines, if you look at the transcription carefully, you'll see there's some fudging. He's not strict about two beats per key, there are a couple of passing tones here and there and at the end he essentially plays an Am11 figure, not fully keeping to the strict idea of the demonstration. To me that's reassuring-- he's not a robot, he's making music out of this challenge. That's what you should do too.

Here's the transcription (tempo is not indicated as he speeds up pretty quickly into it): 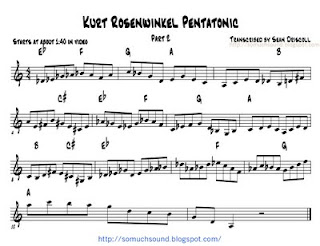 Update:
Mads has a nice blog about Kurt's music that addresses this seminar as well. Check it out: themusicofkurtrosenwinkel.blogspot.com
Posted by LiquidWeight