Another quotation from Before the Music Dies.

If you haven't watched this movie, do yourself a favor and do it now. I'll wait.

Not only does it have great performances, there are some amazingly insightful interviews with Erykah Badu, Dave Matthews and Brandford Marsalis among others.

One of moments that hit me as a practicing musician and someone who is constantly trying to get better was this:

Interviewer: "What have you learned from your students?"

...much like the generation before them, the only thing they're really interested in is you telling them how right they are and how good they are. That is the same mentality that basically forces Harvard to give out B's to people that don't deserve them out of the fear that they'll go to other schools that will give them B's and those schools will make the money. 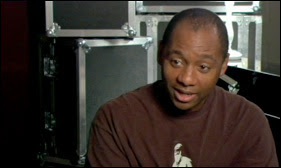 We live in a country that seems to be just in this massive state of delusion. Where the idea of what you are is more important than you actually being that. And it actually works as long as everyone is winking at the same time. Then if one person stops winking, you just beat the crap out of that person and then they either start winking or they go somewhere else.

But it's like, yeah, my students, all they want to hear is how good they are, how talented they are they're not really -- most of them are not really willing to work to the degree to live up to that."

I've talked to a couple of friends about this and have gotten various reactions, some positive and some negative.

But I think he has a point. Especially the negativity of, "the idea of what you are is more important than you actually being that."

It's tough to take a real assessment of your ability as a musician. It requires being objective about your playing which is nearly impossible while you're doing it: you're the performer, not the listener.

So how do you get an idea of what you sound like?

When I took some lessons from Wayne Krantz he made me buy a $20 Sony cassette recorder. Cheap, crappy and it works. It's also completely objective about your playing.

Record yourself. Play something you think you're good at, record it, then listen back. I'll bet it's not as good as you thought. How bout this: do you think you stand up straight? Have someone take a candid picture of you walking or talking to someone.

There's a lot of stuff we do we're not aware of and it follows into your playing as well.

So make recording a regular part of your practice. Maybe five minutes a day of just performing into a tape recorder and listening back to it. Acknowledge the things that are good, and pay attention to the things that aren't, then figure out how to fix them. And stand up straight while you're at it.

This is the hard work that Branford is talking about.
Posted by LiquidWeight